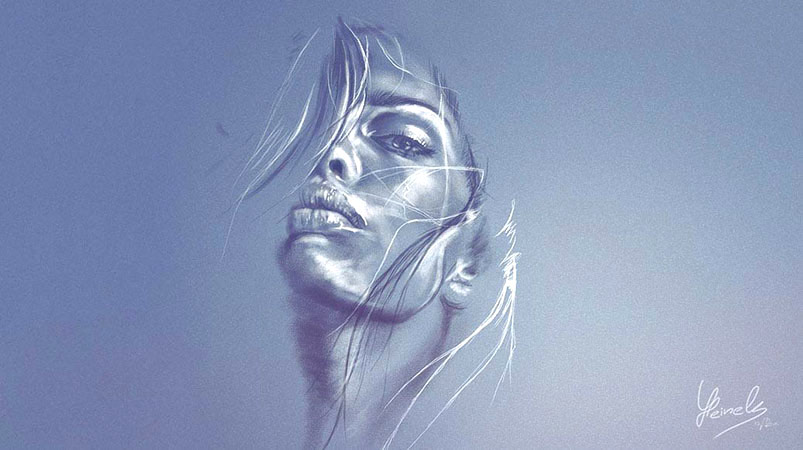 Thinking of Blue Velvet series, it is something so different in comparison to all I have done yet. It is not just about the style and technique I have used which differ. Yes. There is the elegance of the unique Velvet Blue in acrylic I have tried to achieve and I still remember mixing it and trying to find the right tonality during one late night whilst listening to an amazing London Grammar’s new album called “Truth is a beautiful thing”. But No, it’s not the blue… It’s more about the story behind and the intimate honesty it communicates in it’s emotions that I believe will talk to you most. The idea behind was to create a series of drawings communicating a story of a woman in three different stages of her mind. Capturing her thoughts, feelings and progress in decisions she makes. I wanted to create it all from her point of view as pure woman’s decisions and the going through. In that true intimate way she would never talk about. Nobody would. So the Blue Velvet series is for me different mainly in the strength of the message and in it’s intimity with a very open strong way how it communicates the feelings and emotions . I wanted to draw and wished you to see it as a pure woman’s way. As I believe it is very different from a way any man would ever take.

I was thinking about this series as a story of one woman but communicated by three different women.  Each of them representing one stage of her feelings and thoughts. Real and strong. These three women they don’t know each other but when you look at it. I mean at all the drawings from the series they are uniting and holding, supporting each other in the feelings and stages of their life and fight the pain they are going through. They understand each other. As in a real life they would.

You can imagine these three drawings if you would like as a story of a life difficulty (they) she is going through. It can be a difficult relationship or something else. Or you can imagine it as three stages of a brake up with her partner. 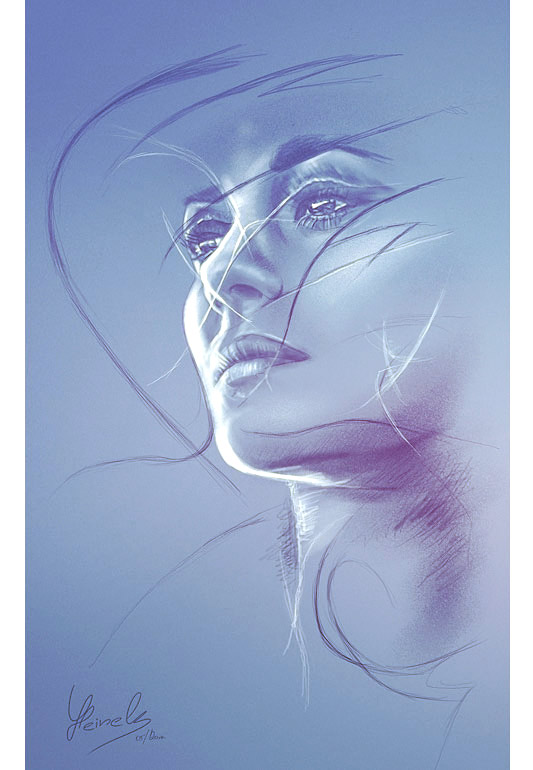 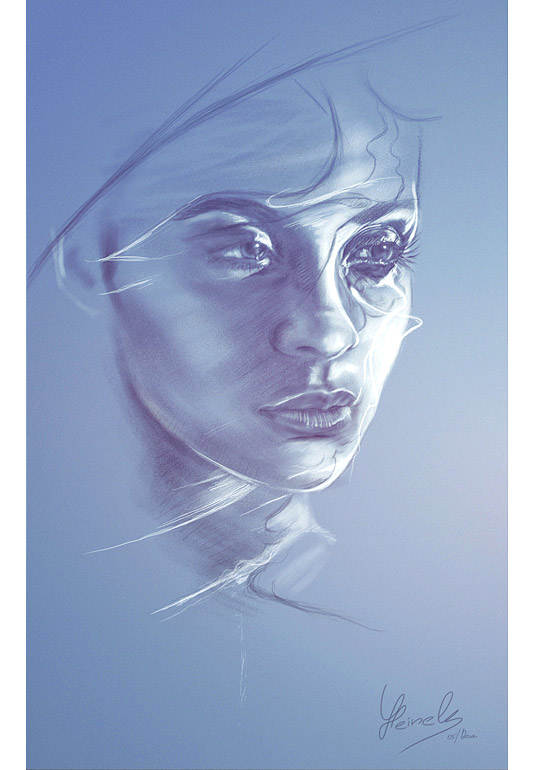 With a first one from the series called “Silent Devotion” I wanted to express a state of mind and her feelings when she tries to find a solution and still remains all as it is. She is protecting it with her automatic and subconscious loyalty as she still believes in it. She takes a gilt or at least a part of it on herself because of the situation and other things. She is blaming herself. She tries to fix things. Make it work out. Find a way even there is none. Or should I say just one? The pain, the fight and the self torture inside her is escalating but she still believes in all as it is in her life.
Second stage of her mind illustrates a second drawing from the series called “Out of Sight” . She already understood that the fault is not really on her side or that the majority of it is not and wants the opposite side to fix it all and see her finally and her point of view and also most importantly she wants the opposite side to see her pain she has been going through. But she is not getting that understanding and things are not changing. Instead they are repeating again. It’s the stage when she can’t take it anymore and is leaving the thoughts of a hope and of finding a way. She is starting protecting herself.

Third drawing portraits a part of the story when she is leaving.  It’s a radical change in her life. Her pain has turned in to a protective state, purely. She fights back. And there is a minimum effort to explain anything. As there is not much to say anymore. I actually wanted to call this drawing originally “test me and see if I stay” but then I felt “Violent Noise” describes much more and better the final statement I wanted to say with this part of the story.

Maybe I could say it shortly at the beginning as:

“It’s a story of three women holding together as they would be one. Understanding each other in their feelings and decisions. It’s a woman’s way and the power of her decision.”

It’s a limited edition (only 450 will be sold) in two different sizes to chose from. Signed by me and numbered. Please leave a comment and share if you like these drawings.

News
Posted in News, Products.
Share
PreviousRetro Series: Let’s go together back in time…
NextDelivered: The largest painting series I have ever made yet…

We use cookies to ensure that we give you the best experience on our website. If you continue to use this site we will assume that you are happy with it.OkPrivacy policy